I was moved by the language of this article, it is reconciliatory and bridge building in nature. I loved the description where he let the “mitti” slip from his hand for what it would remind him of, it went against his sentiments of watan ki mitti, but he did the right thing to let it go.
What happened during partition was sad. What is shameful is, those who endured the pain on all sides, continue to pass on that hatred to their offspring, do they really want to dump their misery onto their children? If we are ‘sincere’, I mean ‘sincere’ peace makers, we should give hope to the next generation and not mess them up with our problems.
When I read an occasional stray note from a Indian or a Pakistani about their hate for the other, it saddens me.  If they don’t claim to be religious, it is fine, but when they call themselves Hindus, Muslims or Sikhs, they are betraying their own religion.  None of the religions teach you to hate, but the politicians and guardians of religions and a few hateful men mess up the lives of future generations.
The bottom line is we have to leave a better world for our kids, we have learn to understand the past but build the future where they can spend their time in finding means to enjoy rather than spend their time in ill-will towards the other.
INTERFAITH CONFERENCE IN KARACHI
I am organizing an interfaith conference in Karachi, if you have an interest to join or to speak, the speech will be checked by me before hand, it has to build bridges.  You can text me at (214) 325-1916 – The event will be in September, and we have every faith except Buddhism is represented, we are looking for Buddhist, connect us with on, particularly a Pakistani Buddhist, but any Buddhist for that matter.
This is a good piece worth reading
Mike Ghouse
All about me at www.MikeGhouse.net
# # #
Pakistan’s Sikh Legacy –
Courtesy – Times of India 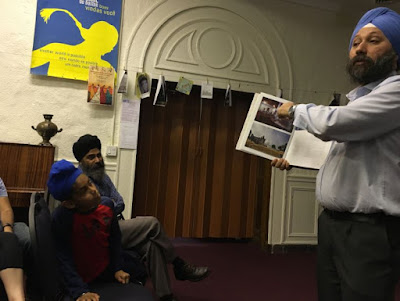 In the two weeks he had spent so far in Pakistan, Amardeep had realised that the “Sikh legacy” of this land went far beyond gurudwaras and ancestral homes, and was in fact not limited to adherents of the Sikh faith. The legacy lived on in human interactions, experiences, memories, music, poetry, spirituality and other aspects of a shared history that belongs not just to Sikhs but also to Hindus, Muslims, Christians and others. For example, others too lay claim to rituals, poetry and music that Sikhs consider to be “theirs” This legacy, he stresses, is secular in nature.
Throughout his journey, Amardeep used the lens, not of a pilgrim, but of a traveler chronicling socio-historical aspects.
An important aspect of this lens is to place the contemporary reality of gurudwaras and havelis built and owned by Sikhs into a historical context without blame or judgment. Many of these buildings are being used as police stations, libraries or people’s homes. The mass cross-border exodus left these buildings abandoned, and those who came to this land were bound to fill the vacuum for their own survival.
Putting things in context also means being able to see the positive aspects, like the fact that the Pakistan government has since 1980s been looking after the holy places of non-Muslims. With the mass exodus of an entire community, the government can’t possibly maintain every aspect of the heritage but clearly the intent is there, as Amardeep stresses. The number of functional gurudwaras in the Punjab has increased from one to twenty-three over the past decades. Several Hindu temples has also been revived. People of all faiths must support and encourage these moves even though they may be, as Singh “the tip of the iceberg” given the magnitude of the issue.
Amardeep also holds responsible for the neglect those who have kept silent rather than being vocal in demanding that this heritage be preserved. Sikhs who visit Pakistan don’t even ask to visit the Lahore Museum, he observes. Due to the lack of demand the Museum’s Sikh Gallery has been closed as Amardeep discovered when he tried to see it.
Pakistani Sikhs, he observes, are in general too poor and focused on their own survival to pay attention to such higher pursuits. It is up to the diaspora — increasing numbers of whom now visit Pakistan for religious reasons — to push for these demands beyond religion.
After Partition, practically the only Sikhs left in Pakistan were those living in the Pashtun areas bordering Afghanistan. Post 9/11 Taliban inroads into the region, accompanied by attacks on religious minorities forced large numbers to flee to the Punjab. Many Sikhs took refuge in the Gurdwara Punja Sahib at Hassan Abdal, says Singh. He notes that Pakistan has for years been combating militancy while also reviving the historical religious sites belonging to religious minorities.
All in all, Amardeep Singh’s message is clearly not limited to Sikhs and Punjab or Pakistan. It is about the need to go beyond surface identities and labels to an interconnected, secular past, and universal values. This is not just about the past but the way to a more harmonious way forward.
This article was first published in Himal Southasian. Amardeep Singh’s “Lost Heritage – The Sikh Legacy in Pakistan” is a monumental 504-page book, weighing 3 kg, with 507 photos complementing the story line. It can be ordered here.