Anti-Sharia Rallies are a Waste of time! Mike Ghouse

Washington, DC, June 5, 2017 — Brigitte Gabriel, a frequent combatant with Mike Ghouse on the Sean Hannity show at Fox News is organizing nationwide Anti-Sharia rallies on Saturday June 10, 2017.   Her organization, ACT for America is recklessly determined on pitting one American against the other, whereas the Center for Pluralism is committed to bring Americans together under one flag as one nation under God for the safety and security of Americans, all Americans.
No Americans needs to be afraid of the other, we are a free people and we will fight with the negative forces to keep our land free from fears and ill-will.
Event: Press Conference about Anti-Sharia Rallies on June 10
Date: Thursday, June 8, 2017 between 6-7 PM
Venue: At the foot of the US Supreme Court
Address: 1 First St NE, Washington, DC 20543
RSVP: https://www.eventbrite.com/e/anti-sharia-rallies-are-a-waste-of-time-press-conference-tickets-35163309405
Mike Ghouse, president of the Center for Pluralism said, “I urge Ms. Gabriel to consider withdrawing this gratuitous act and join us in a civilized conversation on Sharia in a symposium we are planning. Let’s stay focused on peace and prosperity instead of flaming conflicts and confusion.”
First, let’s get the position of American Muslims out of the way. As Muslims, they uphold, protect, defend and celebrate the values enshrined in our constitution. Their faith reinforces the idea of one nation with liberty and justice for all.
Secondly, they and their institutions are not seeking or asking for the type of Sharia that ACT for America is imagining and opposing.
Lastly, the Center for Pluralism is committed to bring knowledge to Americans to allay their fears about Sharia. A series of articles will be published in the newspapers, or at least our website www.CenterforPluralism.com and Dr. Ghouse will be available to discuss Sharia.
Websites: www.CenterforPluralism.com | www.ShariaLaws.com
Contacts:
Mike Ghouse, (214) 325-1916, Mike@CenterforPluralism.com | Nationwide
Sam Madden, (214) 842-9715, Sam@CenterforPluralism.com | Dallas
Ali A Fateh, (845)213-7375, Ali@CenterforPluralism.com | New York 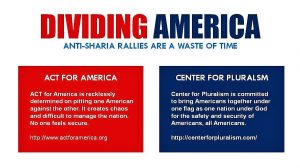