Deep down, all humans seek justice and a balance in life, and without it, they are lost in sectarian warfare. As a member of the civilized nations, we need to collectively work towards building a cohesive India, where no Indian has to live in apprehension, discomfort or fear of the other — an India where everyone is free to eat, drink, wear and believe whatever suits him/her.
Hindus, Muslims, Dalits, Sikhs, Christians, Jains, Buddhists and others have an equal interest in building a cohesive India where no Indian has to live in apprehension or fear of the fellow Indian, and together achieve the prosperity for all. Prosperity without peace is bound to be lost, why exercise then?
The villains get destroyed in the end, it’s the hopeful story of every religious scripture and we see that in every movie in India.
In the following article by Rajeev Khanna, he explores how the extremists among Hindus may lead India to destruction, in the end, everyone will lose out if we don’t take corrective actions.  Our goal at the Center for Pluralism is to create societies where no one has to live in fear of the other.
First of all, Hindutva is not Hinduism. Hindutva is a political ideology that believes in the supremacy of a group within the fold of Hinduism. Its parallels are Nazism to Christianity, KKK to Christianity, ISIS to Islam, Taliban to Islam, extreme Zionism to Judaism (the moderate strand is fine as they aspire for a homeland).   Its comparison would be Nazi’s who believed in the superiority of the Germans and were hell-bent on annihilating the others, Jews in particular. Indeed, the Hindutva group of families, also known as Sangh Parivar under the flagship of RSS idolized Hitler and believed that RSS should do the same with people who do not subscribe to their views, as the entire Indian population is of the same race, no matter what religion they belong to.  India’s current political government is run by the RSS and hopefully, it will change in the 2019 General elections to restore India to its pluralistic heritage.
Four years ago, I wrote that the sparks of tensions are dormant and will flare up anytime if they are fanned. Those sparks are an injustice to Sikhs during the Sikh Genocide, Gujarat Massacre of Muslims, Kashmiri Pandits, injustice to Dalits, Christians, and Muslims…  The BJP runs hundreds of fake news portals pitting one Indian against the other, it is not good for India or any Indian in the long run. The country will be consumed with daily battles of who can eat what, who can believe what instead of can we all get food to eat, clothes to wear and have safe drinking water….
The women, Sikhs, Jains, Christians, Muslims, and Dalits live under tensions and it is not good for the nation.   We need to sit down and reconcile our differences.
Mike Ghouse 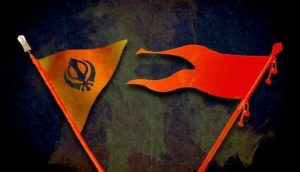 There are rumblings in the Sikh community once again over the interference by Hindutva forces in its religio-political affairs. Even as the recent controversy over the dilution of Sikh history in the class 12 history books in Punjab is yet to die down, fingers are now being pointed at booklets being printed at Nagpur under the ‘Bharat Bharati’ series. The address of the publisher on these books has been given as ‘Shree Bharati Prakashan, Dr Hedgewar Bhawan Parisar, Nagpur’.
These books in Hindi are said to be in circulation in various parts of India and the Sikhs are agitated over their “blasphemous” content. There are three books named ‘Guruputra Fateh Singh Zorawar Singh’, ‘Guru Tegh Bahadur’ and ‘Guru Gobind Singh’ in particular, about whose content there is unrest.

It is being pointed that on the cover of the book ‘Guru Tegh Bahadur’, the picture depicting the Sikh Guru shows him in almost Mughal attire. This once again brings to the fore the debate over promotion of idolatry and pictures of Sikh Gurus that has been going on for quite some time.
Then there is resentment over the content of these books. Sources say that these contain lines saying that Guru Gobind Singh and Shivaji had waged a war against the political power of Turks that have been referred to as “Malech”, which is a typically Vedic term meaning “barbarian”. Sikhism, on the other hand, is opposed to discriminating against any community using such terms.
In these books Guru Arjan Dev has been referred to as a ‘Gau Bhakt’ and it is written that his assassination was a sacrifice for ‘Sampoorna Hindu Samaj’. There are also objections to some historical facts represented in these books.
“In the first instance there is an attempt to compare and draw parallels between Guru Gobind Singh and Shivaji, who was an ordinary mortal. Then Guru Arjan Dev has been called a ‘Gau Bhakt’ which is totally wrong because unlike Hinduism, cow is not worshiped in Sikhism. Calling Guru Tegh Bahadur’s sacrifice as something for the ‘Sampoorna Hindu Samaj’ is again something very wrong because this was a sacrifice for humanity against oppression which could have been from anyone,” said Baldev Singh Sirsa who has been continuously taking up the issues pertaining to the misrepresentation of Sikh history.
He pointed to the common perception among the Sikhs that the Hindutva organisations including the RSS treat the Khalsa as a sect of the Hindus created by Guru Gobind Singh to confront Islam and Sikhs are described as yet another Hindu “shakti kendra” (power centre).
This is not the only recent instance that has kicked up a storm. Just a few days ago there was the controversy over the renaming of the Dyal Singh College (Evening) in Delhi as ‘Vande Matram Dyal Singh College’. It was once again left for the Union human resource development (HRD) minister Prakash Javadekar to intervene and assure that the government would not allow the renaming of the college.
Despite Javadekar’s assurance, the chairman of governing council of the college Amitabh Sinha reportedly said the government cannot interfere in the administrative matters of Delhi University to which the college is affiliated as it is an autonomous university. He had said that renaming was within the permissible law. Many among the Sikhs see it as a strategy of the Sangh Parivar to create confusion among the community.
While the name remains unchanged for now, the damage has already been done. The parties opposing the Shiromani Akali Dal (SAD) once again called for the party’s lone representative in the Union cabinet Harsimrat Kaur Badal to quit the Bharatiya Janata Party (BJP)-led Union government. Harsimrat took up the matter with Prime Minister Narendra Modi asking him to sack Amitabh Sinha for going against the undertaking of the HRD ministry that the name of Dyal Singh College, Delhi will not be changed.
She pointed that despite a written assurance by Javadekar on 16 January this year that the name of the college will not be changed, its management deliberately inflamed the sentiments of the Sikh community by putting up banners changing the name of the college to ‘Vande Matram Dyal Singh College’ at its annual prize distribution function on April 25. She said Amitabh Sinha was deliberately misusing the name ‘Vande Matram’ at the cost of destroying the legacy of noted philanthropist Dyal Singh Majithia who was a social reformer and had donated all his wealth for public welfare.
Harsimrat had also requested Modi to take strict action against Delhi University vice chancellor Yogesh K Tyagi, who according to her had extended indirect support to Amitabh Sinha and didn’t take action against him despite numerous complaints.
Last year the matter had been raised by SAD leader Naresh Gujral in the Rajya Sabha also to which Javadekar had given a categorical assurance.
“The onslaught by the Hindutva organisations including the RSS on institutions continues. The Sikhs are being attacked and provoked from all sides be it the issue of Dyal Singh College, films like Nanak Shah Fakir and reference to Gurus in books. What comes as a surprise is that the name of Dyal Singh Khalsa College in Lahore remains unchanged while there has been the recent mischief in Delhi,” said Captain Chanan Singh of United Sikh Movement (USM), an organization that claims to represent Sikh groups outside the ambit of Shiromani Akali Dal (SAD) and the Congress.
Referring to the RSS organising a congregation of different faiths through its affiliate Rashtriya Sikh Sangat in Delhi on 25 October to mark the 350th birth anniversary of Guru Gobind Singh, he said, “We were threatened with the message that if we did not toe their line we would be confined to only one state. We want to tell them to introspect what led to the shrinking of the Sanatan Hinduism to only one country. If they do not mend their ways it will further shrink in India too.” The Sikh organisations had boycott the event.
Observers have pointed time and again that there should not be interference in the Sikh matters by outside forces. It should be kept in mind that Punjab has some distinct features. It is a border state where a national religious minority is in majority. It is a state where issues of identity are taken very seriously and any provocation can lead to a flare up.