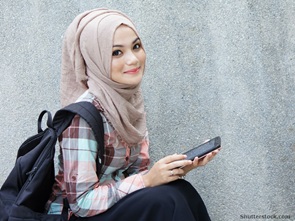 When I was a toddler, I was terrified of ladybugs. There was just something about how different they looked that made me fear and despise them. To me, they looked harmful. As I grew older, I learned that ladybugs are not only absolutely harmless to humans but also extremely beneficial to us because they feed on landscape pests without harming our plants or other harmless bugs. Knowing this, I no longer am scared of ladybugs and I actually enjoy their presence.
There are millions of Muslims living in the United States and I can guarantee you that every single one has either directly faced some sort of hateful discrimination or knows of a Muslim that has. According to the Center for the Study of Hate and Extremism, a Muslim American is a victim of a hate crime every three days. Recent polls show that more than half of Americans have an unfavorable view of Islam. Sadly, Muslims are today’s ladybugs.
As a Muslim American who continually strives to do everything I can for the betterment of my community and this nation, it is saddening to see this hate. Yet just as my fear of ladybugs was caused by my ignorance about them, similar is the case with how Muslims are currently viewed. It’s time to change that. Let this be the piece that does away with your unwarranted fear of Muslims.
Here Are Ten Reasons Why You Should Not Be Afraid of Muslims:
1. All terrorists are Muslims EXCEPT the gigantic majority that aren’t.
According to the FBI, 94 percent of terrorist attacks carried out inside the United States from 1980 to 2005 have been by non-Muslims. Keyword: Non-Muslims. Looking overseas, less than 2 percent of terrorist attacks carried out in Europe in the past five years have been by Muslims.
If this miniscule percentage isn’t calming enough for you, I can present better. From 9/11 to the end of 2015, less than 0.0002 percent of Americans killed were killed by Muslims. No matter where you look, every single statistic will scream to you that there is absolutely no valid association between the over 1.6 billion peaceful Muslims in the world and the terror committed by those who hijack our religion.
Furthermore, if you insist on using these single-digit and decimal statistics to justify such an association, I strongly suggest that you consider the double-digit statistics regarding non-Muslims and acts of terrorism.
2. Muslims do not plan to take over America with our religion.
One thing more hysterical than my childhood fear of ladybugs is this unfounded fear that Muslims plan to take over this country and impose Sharia law. The fact of the matter is that this is absolutely untrue as the majority of Muslims actually want to adopt American customs and ways of life, according to the Pew Research Center.
But let me humor the Islamophobes: Even if Muslims wanted to take over this nation and turn the White House into a super cool mosque (which totally isn’t the case), we would not be able to. Muslims make up less than 1 percent of the total U.S. population. We are a minority of a minority and never in history has 1 percent of a nation’s population succeeded in taking over the other 99 percent. To put things into perspective, this would be equivalent to a toddler taking over an entire elementary school during nap time.
3. Speaking of toddlers, if you are scared of Muslims then you should be terrified of toddlers.
More Americans were killed by toddlers than by Muslims in 2013. And in 2014. And in 2015. And every year for the past several years.
Based on these facts, you should be more afraid of toddlers than you are of Muslims, or more realistically, less afraid of Muslims than you are of toddlers. Please remember this the next time you are on an airplane with a Muslim. Speaking of airplanes, you are more than 11,000 times more likely to die in an airplane accident than from a terrorist plot involving an airplane.

4. If you are scared of Muslims, then you should also be afraid of household furniture.

Recent data from the Consumer Product Safety Commission shows that since the 9/11 attacks, which have caused Americans to become terrified of Muslims, Americans have been just as likely to be crushed to death by unstable televisions and furniture than they are to be killed by a Muslim. On this same note, in the time it took you to read this far, at least one American has died from a heart attack. In the time it takes you to finish this article, at least one American will have died as a result of suicide. By tonight, at least one American will have died as a result of distracted driving. By the time you wake up tomorrow morning, an American child will have died as a result of gun violence.
Meanwhile, not a single American would have been harmed by a Muslim as all of this is happening. Rather than fearing Muslims who pose no harm, why not work to address the aforementioned preventable deadly leading causes of death plaguing our nation?
5. When we say Islam teaches peace, we really mean it.
There is no bigger award for those who promote peace than the Nobel Peace Prize. That being said, 5 out of the 12 past people who have won this award have been Muslims. So if all Muslims are terrorists because a single digit percentage of terrorists happen to be Muslim, then all Muslims are peacemakers because 42 percent of Nobel Peace Prize winners in the past 12 years have been Muslims.
6. Muslims play an essential role in fighting terrorism at home.
Many polls and studies conducted in the last few years show that Muslims have played a crucial role in helping law enforcement find terror suspects in the United States. In fact, a recent study by Duke University showed that Muslim Americans helped catch more terrorism suspects and perpetrators than the United States government itself. Furthermore, many Muslims have served and currently serve in the military to help protect this nation from terrorists.
7. Muslims hate ISIS just as much as you do.
Here is a fact that is not well known to many: Muslims are the the largest victims of ISIS’s terror as well as the largest victims of all terrorism in general, according to theU.S. State Department. Muslims want to defeat terrorism just as much as any other American, if not more. This is why we have Muslims like Niloofar Rahmani, Kubra Khademi, many Muslim youth, and various Muslim groups and scholars that have done much more to combat ISIS than Islamophobes like Donald Trump ever will.
8. Muslims are doing amazing work in the United States.
We want to help our fellow Americans. We actually enjoy helping. You don’t have look far to find evidence of this. Just last year, Muslims raised over $100,000 to rebuild burned black churches, raised nearly $200,000 to help the San Bernardino victims, and donated 30,000 water bottles to help alleviate the current Flint water crisis. Even Deah Barakat and Yusor Abu-Salha, two Muslims who were killed by a hateful non-Muslim terrorist, were recently awarded the MLK Unsung Hero Award for their significant contributions to social justice, equity or diversity, and having made a positive difference in the lives of others.
9. Muslims are helping break gender stereotypes.

This nation we live in is a seen as a symbol of freedom and opportunity and Muslims lead the nation by example. American Muslims not only hold more college degrees by proportion than the general U.S. population, but also make up the second-highest level of education among major religious groups. To add, American Muslim women hold more college or postgraduate degrees than Muslim men and aremore likely to work in professional fields than women from most other U.S. religious groups.
Nearly all Muslim Americans agree that women should be able to work outside the home and a significant majority believe there is no difference between men and women political leaders. It is easy to see that Islam encourages women to aspire for greatness and use their success to help others, this is why the youngest doctor in the world is a Muslim woman and the first university in the world was founded by one as well. In addition, the same Islam that Americans are afraid of has granted women rights of equality thousands of years ago that women in the United States don’t have to this very day. While an Equal Rights Amendment still has not been passed in the U.S. allowing women equal rights as men, the Quran granted this right to women long before this nation was ever founded.
10. Muslims have been in the United States for centuries.
The history of American Muslims goes back more than 400 years. Scholars even estimate that a quarter to a third of African slaves brought to this nation were Muslims. Despite the unfortunate circumstance of our first arrival, Muslims played a significant role in the establishment of this nation. And despite all the hatred we continue to receive, we want to play a role in making this nation great and safe.
Twenty-one Muslims were killed by the Taliban in Pakistan this week and I’m still waiting for the world to respond as furiously as they would have if the victims were non-Muslims. As I ululate the names of the 21 Muslim university students killed on Wednesday, I ask myself: Why are Muslims hated because of terrorism when we are the largest victims of it?
There is not a single day that goes by that I don’t think of Deah Barakat and Yusor Abu-Salha and how they will never be able to continue carrying out the amazing work they were doing because they were hated and killed simply for being Muslim.

I am Deah Barakat. I am Tamir Rice. I am Yusor Abu-Salha. I am Sandra Bland. I am every single American that has died as a result of hate and unjustified fear. On behalf of all Muslim Americans, I urge you to rise above your unfounded fears and trust in the truth that implores you to accept us as equal citizens of this nation. Look past our hijabs and long beards and see the love we have in our hearts. And please, stop seeing us as terrorists when it is terror that we resist. We want to help defeat terrorism and we want to help make this nation great, all you have to do is grab our hand. We have it extended out.

Omar Alnatour is a Palestinian-American college student. He is one of the biggest voices on the Palestine-Israel conflict on Twitter with his tweets being featured on Huffington Post, CNN, , Buzzfeed, The Independent, Al Jazeera, Vice News, AJ Plus, RT News, and Mondoweiss.

0 thoughts on “10 Reasons You Should Not Fear Muslims”