First of all, I want to assure the Gay and Lesbian Americans that as Muslims, we will stand up with you for your right to life, liberty and pursuit of happiness.
Secondly, you are our friends, neighbors and fellow Americans. You have been a part of my events over the years, and I have participated in your events.
At this time, some of you may be apprehensive of Muslims, and I understand that, but it is time to come together and not let extremists tears us apart, that’s how they weaken us – by dividing us. Let’s not let that happen. We are all Americans and we have to express that through our actions of standing up for each other. 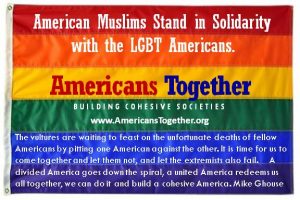