PLEASE NOTE: At the Center for Pluralism, our goal is to reach out to everyone to find out lasting solutions, if you don’t have all the cards on the table, you are not dealing with full information. We are pleased to share the experience of Sam Madden and his daughter visiting different rallies and experiencing first hand, instead of assuming what happens. On my part I have attended both the Republican and Democratic rallies.  We have to be informed.
By Sam Madden
The announcement that Donald Trump was going to have a rally in June of 2016 in Dallas was just days before the event was to take place. He was holding a fund raising event and wanted to tie in a rally before he left. But he kept running into roadblocks. Just about every city had stated that it was too short of a notice to provide the proper security. In addition no venue seemed to be available on such a short notice.
Then Gilley’s on Lamar Street in South Dallas stepped up to provide the venue and with the coordination of the City of Dallas the event was set to take place on Thursday June 16.
It was reported almost immediately that protests would be organized outside of Gilley’s.  I immediately thought of my daughter and I are going to experience this event. Both from the protest side and the Trump supporter side. 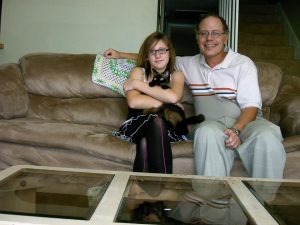 Up until this point all we knew regarding these types of events is from what we saw on TV or read from the Media.
Mary was excited to go as was I. I was admittedly a little apprehensive because of the violence that had been reported from both sides at similar rallies. So I took pepper spray with us.
For this excursion I decided to wear a T-shirt I have which reads “I found Jesus Christ in the Quran.” I don’t wear it very much, but I thought this would be the perfect place to express who I am as much as I could without having to say anything.
I figured parking might be difficult so we decided to take the light rail, which dropped us off within a few blocks of Gilley’s. As we walked up to where the event was taking place there were numerous police officers present.  As we approached, the police were directing people in two different directions. In one direction they were directing the protesters and the Trump supporters were being directed towards Gilley’s. The police were trying to keep things peaceful and keep the two groups away from each other.
When a police officer asked us if we were supporters or protesters, I said, “Neither, we are just here to observe.” The officer kindly told me that we could go in either direction in that case. 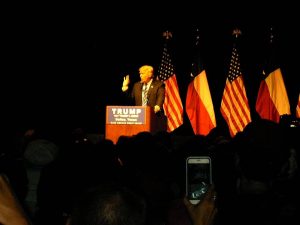 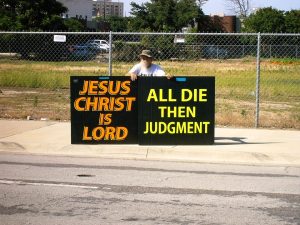 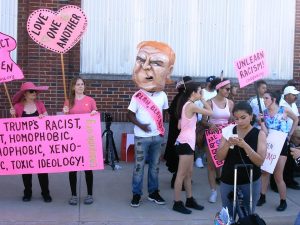 First we visited the anti-Trump crowd. The first protesters we came across were from the organization “Code Pink.” I was already familiar with this organization as they are highly involved with the Israeli/Palestinian issue and support the “BDS” movement, (boycott, divest, and sanctions).  We then walked around some more and met with other protesters but there wasn’t a whole lot at the time and this was about an hour before the rally was to take place. There was probably no more than one hundred.
We then started to head up towards Gilley’s. As we were walking in the parking lot a gentleman who saw my shirt kindly said, “the protesters are over there,” (pointing in the opposite direction). But of course we just kept walking toward where the rally was to be held.
Once there we stood within twenty-five feet of the entrance. We talked with numerous people. We viewed the different types of people going in. We saw members of the LGBT community, some Hispanics, as well as a Muslim woman, (wearing a Hijab) and her son. Though of course these groups were in the minority.
As we were talking with people a gentleman came up to us and offered us his extra tickets to go inside to attend the actual rally. Mary really wanted to go in, but we had a lot of stuff with us, (including the pepper spray), and security was being very strict on what they would let inside. Pockets had to be emptied, handheld metal detectors were being used, and they wouldn’t even let you take your bottle of water in. Though free water was available outside to drink before entering. So I initially declined the tickets.
Mary was a little disappointed, but then the gentleman who had the extra tickets was about to go in but before he did he gave me his extra tickets and said just pass them on to someone who could use them. After talking with my daughter we decided that we didn’t have anything of value so we decided to use the tickets. My pepper spray was confiscated and the water bottles had to be thrown away before we entered.
Once inside the first thing that was stated over the PA system was that if there were any trouble makers in the crowd that people should raise the banner that they were handed upon entering and chant “Trump, Trump, Trump.” Security would then escort that person out of the rally.
There were about five people in total that were there to cause trouble. What I found out is that these individuals wear an anti-Trump T-shirt under a different shirt and then once inside and the rally starts, they take off their cover shirt and start yelling mean rhetoric. The first time it happened it was a lady and Trump was actually very nice. Security went over to her and she seemed to have settled down. Trump then asked her, “Do you want to stay?” She stated something along the lines of not with a bunch of haters. So she was kindly escorted out.
During the rally there were many speakers including but not limited to: Pastor Robert Jeffress of the First Baptist Church in Downtown Dallas, Mark Davis, (Conservative radio talk show host) and a Vietnamese Refugee. Particularly noteworthy was when the Vietnamese Refugee told the crowd that he entered the country legally; abiding by the laws of the United States, a thunderous applause broke out.
When the rally was over and we were walking back to catch the light rail we noticed that the anti-Trump crowd had grown enormously. It must have been in the thousands. At this point the police were having a difficult time keeping the protesters away from the Trump supporters. Many of the protesters were shouting obscenities, some were throwing rocks, (one reporter got hit in the head and needed medical attention), the protesters were calling the Trump supporters, haters, racists, bigots, etc. As I walked by the protesters with Trump supporters, whenever I heard that type of slander I would point to my T-shirt. But it didn’t make a difference.
In summary it was a great experience for my daughter and I. We saw what can happen when emotion overtakes logic and objectivity. We saw what fear can drive people to do.  We also now had a better understanding, having talked with many people there and Trump supporters in our family, their mindset and their concerns. The vast majority are not deplorables, rednecks, racists, or uneducated. Just as the vast majority of Muslims are not terrorists.
I do kind of find it ironic though that the same far left liberal camp that uses logic and objectivity when it comes to addressing the issues of Islamic Extremists, by not extending that behavior to all Muslims, turns around and extends to most, if not all Trump supporters, a stereotype of fascists, racists, bigots and the like.
If we can put aside our emotions, sit down and talk with each other we will find out that we are not far apart in what we all want. We all want a safe America. We all want to leave an America for our children and grandchildren better than it was when while we were here. This can be accomplished. It’s time to listen to each other with open ears, an open heart and an open mind.
Sam Madden is a volunteer representative and consultant for CFP. He was raised Catholic, was a member of the Baha’i Faith for over 5 years, attended a non-denominational Christian church with an Evangelical leaning for about 8 years, but now considers himself a Christian Agnostic. He can be reached at sam@centerforpluralism.com