Americans Together on Veterans Day -2017
Friday, November 10, 2017, Arlington National Cemetery — The Center for Pluralism joined in with Adams Center and Alliance for an Indivisible America in honoring American Veterans today at the Arlington National Cemetery.  The list of organizations that were a part of the event is listed below.
More pictures will be added later –https://www.flickr.com/photos/mikeghouse/albums/72157689111296754
An interfaith service to honor American Veterans has become a tradition and Mike Ghouse with the Center for Pluralism has led this effort for in the past several years. 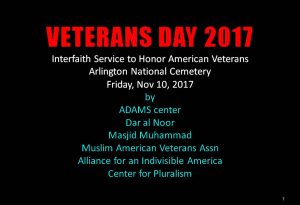 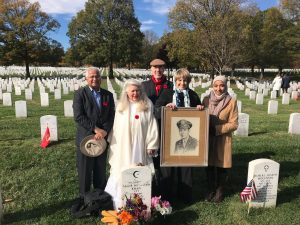 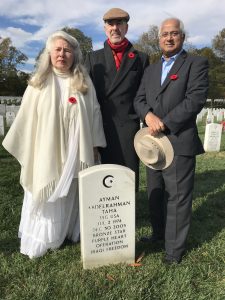 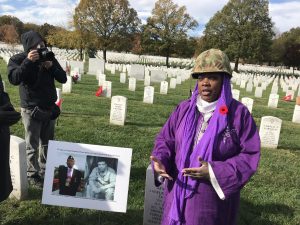 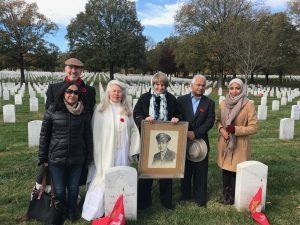 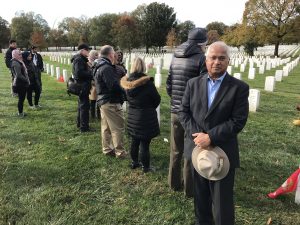 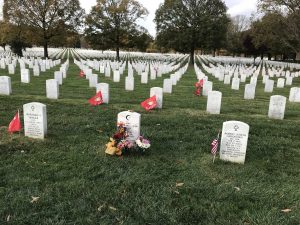 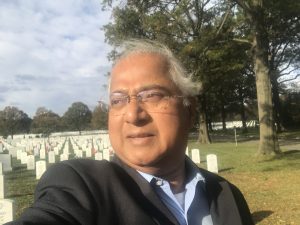 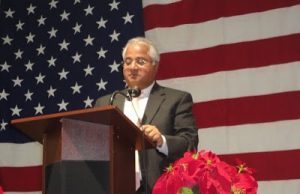 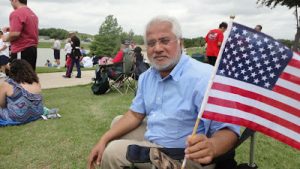 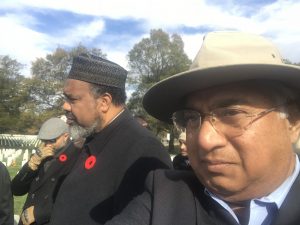 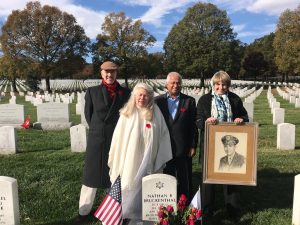 Dr. Ghouse opened his remarks with e-pluribus unum, we are Americans, one people out of many and we are all in this together.   This is a shining example of integration where Muslims, Jews, Christians, Hindus and others have come together to honor people of all faiths who have served our nation.  Mike also shared the story of his father figure Mr. Everett Blauvelt who had served in the navy ship off the coast of Brazil during World War II. Mr. Blauvelt was acknowledged with gratitude for sponsoring Mike.
“We are thankful to our creator for blessing us with life and thankful to our founding father for the gift of life, liberty and pursuit of happiness as the foundation of our nation. We appreciate the men and women in uniforms for defending our freedoms and guarding our safety.  We are pleased to acknowledge your service to the nation, and I appreciate the sacrifices you have made to keep us safe.” Mike added.
Mike shared his appreciation for our veterans.  He has made trips to the DFW Airport to welcome the returning soldiers, has spoken at the homeless veterans luncheons for years, visited the veterans at VA hospital in Dallas for spiritual healing.  He has been a part of Memorial Day and Veterans Day events.   Twice in the last decade, he drove from Kentucky to Dallas on the Memorial Day, and stopped at every veteran’s cemetery to say his prayers.
Mike concluded by saying, “will stand with our veterans in fighting and defending our freedom any time and all the times.”
“Imam Mohamed Magid, ADAMS Executive Religious Director, led a traditional Muslim prayer at the grave site of Staff Sgt. Ayman Taha, a member of the ADAMS community who died in Iraq in 2005 while serving in the US Special Forces.  Imam Magid, who had presided over the funeral of S/Sgt Taha in 2006, noted that his sacrifice was fully in keeping with the dedication of the Muslim community to their American homeland and that his sacrifice was a testament to the patriotism of all immigrants who love America, of whatever faith.   Several of the MAVA commanders also recalled their own service in the US Army, Navy and Air Force during the Vietnam War, and how much it meant for them to be able to honor the sacrifice of all their comrades, living and dead.”
According to AIA 2020 Executive Director Robert Marro, a past member of the National Guard and a retired senior US Foreign Service officer, “Many American citizens were born outside the USA, but their level of patriotism and love of country is no less than native born Americans.  Like these New Americans of today, my Grandfather, from an immigrant family from Italy, fought for America in France in 1918 along with many fellow American soldiers who barely spoke English but wanted to repay the country that had given them so many opportunities.  I am proud to have served my country as a Muslim American, and especially proud to be associated with an event that typifies how much America has benefitted from the service and dedication of both its new and old citizens.”
Sister Andra Baylus spoke about the need for Americans to come together.  Sister Asma Haniff shared the story of her father who served in World War II and is a decorated Veteran honored by President Obama with the Presidential Medal of honor.  Sister Andrea Barron brought in her father’s picture who served in World War II with a message of Unity.  Ambassador Islami Siddiqui appreciated the interfaith gathering and hoped this sets an example for America.
I appreciate the veterans all around the world, even if they are enemies of my nation, they are simply serving and doing what is asked of them. We have to admire them for fulfilling their duty. The wars are waged by politicians and not the soldiers, and as a part of civilization we need to put a leash on our politicians, but must continue to honor our veterans. It is not easy to be out on the field, away from their loved ones, and having their back for the fellow soldiers.
The event was attended by veterans, family members and supporters from the Muslim American Veterans Association, the Center for Pluralism, MACCPAC, the Greater Washington Muslim Jewish Forum, the All Dulles Area Muslim Society (ADAMS), the Muslim Association of Virginia/Dar Al Noor mosque, Masjid Muhammad in Washington, the Muslim Community Center of Maryland, various Christian churches, Jewish synagogues and individual visitors to the Cemetery who happened upon the event.
Here are few of the many links to our participation including two videos:
https://www.youtube.com/watch?v=KUCHWggiwqw
In memory of Everett Blauvelt
https://theghousediary.blogspot.com/2013/04/in-memory-of-dadski-everett-blauvelt.html
Veterans Day parade 2012:  https://theghousediary.blogspot.com/2012/11/veterans-day-parade-in-dallas.html
Veterans Day Parade – https://www.flickr.com/photos/mikeghouse/sets/72157631993360112
Speaker at Homeless Veterans Luncheons- https://www.flickr.com/photos/mikeghouse/sets/72157637920447103/
# # #