Civil Dialogue is based on respecting the otherness of other. You are who you are and I am who I am, neither one of us is more privileged than the other, nor do we have a stamp of approval from God to give us an automatic advantage over the other.
The purpose of a dialogue is to understand each other’s point of view to find solutions to a given conflict, without getting angry, digging in our heels or denigrating the other.
I really liked Dan’s speech, and I hope if our other speakers can share their notes, we will publish them as well.
Mike Ghouse
# # #
Abraham/Ibrahim – Our Common Father
Written and Delivered by Daniel Spiro, at a Meeting of the Jewish-Islamic Dialogue Society of Washington (JIDS). Hosted by the Hill Havurah Jewish Congregation
February 25, 2018, Washington D.C. 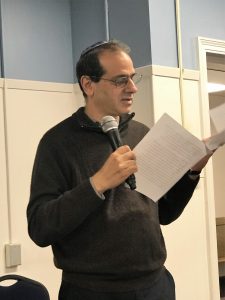