Holi is a Hindu festival of radiance and celebration of spring with colors that nourish one’s joyous moods and complements the function of respective elements in the atmosphere. The essence of Holi is liberation and breaking the barriers between adults and children, family members, and friends, and the festivity opens up to each other.
It is celebrated through out India, and in Pakistan, Bangladesh, Nepal, Sri Lanka, Fiji, Indonesia, Malaysia, South Africa, Zimbabwe, Jamaica, British Guyana, Suriname and other places. 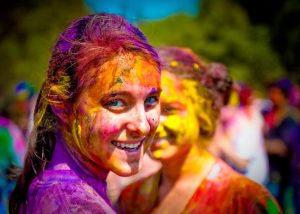 Although Holi is part of the Hindu tradition, most Indians participate in it, it presents unity of Hindus, Muslims, Sikhs and Christians and of course, Jains, Zoroastrians, Baha’i, Jews, Buddhist and native traditions

Legend has it, that Lord Krishna is believed to have complained to his mother about his dark complexion while Radha’s had a lighter skin. Krishna’s mother decided to apply color to Radha’s face (Reverse Make up?) The celebrations officially usher in spring, the celebrated season of love.
Several years ago, my son, daughter and I were drenched in Holi colors at the Hindu Temple festivities and were driving home. At a stop light, people in others cars on either side stared at us and looked scared and drove off screeching on the green light… the three of us laughed and looked at each other…  it dawned on us that we looked bloody, green, yellow and mellow…….colors in our hair, face and clothes…

My kids thoroughly enjoyed throwing the colors in liquid and dust forms on me, they loved it. I would also call it friendship festival as it removes inhibitions
.
The picture below reflects that sentiments – all colors coming together to create oneness, thus the phrase Vasudaiva Kutumbukum; the whole world is one family. Similar expressions are a staple in every faith.

Holi is celebrated at the end of the winter season on the last full moon day of the lunar month Phalguna which usually falls in the later part of February or March.
Since 1993, I have been writing about every festival on the earth, have done a weekly Radio program called “Festivals of the world” and shared about each festival.  Make it simple enough that most people can get the essence of it. For Hindus there is lot more depth and meaning to it, but for the non-Hindus, this gives them an idea about the festival. It is a part of the Pluralism education, so we all can know each other and appreciate our own uniqueness. Each one of is a model of our own.
Happy Holi and please enjoy the songs;
From the movie Lagaan, Radha Kaisay na Jalay – https://www.youtube.com/watch?v=Fwe7PwZqpLI
Another one that reflects unity –  http://www.youtube.com/watch?v=NocV6jsegVY
Top ten Holi songs – http://www.youtube.com/watch?v=YEkZddiPP7g&feature=related
Mike Ghouse is committed to building a cohesive America and offers pluralistic solutions on issues of the day. He is a speaker, thinker and a writer on pluralism, politics, civic affairs, Islam, India, and cohesive societies.www.ProfessionalSpeakerMikeGhouse.com and current articles atwww.TheGhousediary.com