I must have said, “God bless America” at least a dozen times at the Department of Justice’s meeting on Religious freedom.  The speakers included Senator Lankford,  Jeff Sessions, Rod Rosenstein, Archbishop Joseph Kurtz, Asmauddin, Harpreet Singh Mokha and many advocates of religious freedom.
Despite the temporary setbacks, America leads the world in religious freedom – God bless the founding fathers for setting up a near perfect system – the rule of law and equal justice for all. I was wishing the lawmakers of other nations look into our system, we have a great model to follow. If there is one single reason I have to choose for the success of America, it would be the rule of Law – people can trust in the justice and go on about living their lives instead of living in apprehensions or having cultural, religious, ethnic battles that no one wins.  We need to be free!
Senator Lankford’s speech was absolutely a delight on religious freedom. I prayed for him, and I will publish that speech here at the Center for Pluralism site. Archbishop Kurtz gave a talk on free will, it sounded like the expanded version of the verse in Quran – There shall be no compulsion in the matter of belief.
Jeff Sessions and other attorneys gave a summary of the defending the rights of Christians, Muslims, Hindus, Jews,  Sikhs and all others.  It feels good knowing that we are a just people, and what do we do? I pray for America, the founding fathers, and our system.  Jeff Sessions has made mistakes, but the rule of law prevailed. I admire his stand on most issues but condemn his stand on dealing with immigration issues. 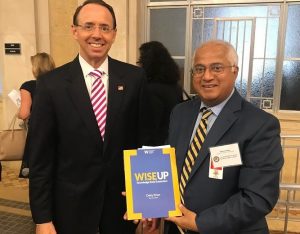 Mike Ghouse presenting the book “Wiseup” produced by Daisy Khan of wisemuslimwomen.org This book is everything you want to know about American Muslims and their commitment to peace and prosperity of America.

The real power in America is in the rule of law, and not the President or Speaker of the house. Imran Khan, the newly elected leader of Pakistan has understood and expressed that in his election victory speech. As a sign of goodwill,  I hope he releases Asiya Bibi and apologizes to the Pakistani Christian community for the apprehensions and fears they have endured through this ordeal. I hope he assures the Ahmadiyya Muslim Community that they need not live in fear anymore and that he will repeal some of the disgusting requirements to get a visa or passport. He needs to assure the Pakistani Hindus that there will be no more forced conversions of Hindu women to Islam.  If Turkey and Iran can release the imprisoned pastors in their jails, the world can see Islam as a religion of compassion and kindness.  We cannot blame others for ridiculing Islam if Muslims are the ones who are tearing it apart.  The Islam they portray is not Islam, Islam is all about justice, compassion and fair treatment of fellow humans, and creating cohesive societies where all humanity can live without fear of the other.
That takes me to India – my motherland that I so dearly love. India has an impeccable history of welcoming the stranger and giving refuge to the oppressed, rejected and the evicted. This beautiful pluralistic 5000-year-old tradition of India is in peril now since the BJP and its affiliates took over power in 2014. I am writing an article called “White Washing religious freedom in India” and hope to appeal to the Prime Minister to restore Dharma, the righteousness that Lord Krishna had promised whenever the society decays. I am sure the collective goodness of Indians will restore that pluralistic heritage. India and Pakistan mirror each other in everything including terrorizing their minorities.
Let’s make an effor to change all that and restore the righteousness.
God bless humanity and give guidance to the leaders.
Mike Ghouse
Center for Pluralism
News (RNS) — Attorney General Jeff Sessions announced during a Department of Justice summit in Washington that he is creating a religious liberty task force to challenge what he called a dangerous movement “eroding our great tradition of religious freedom.”
Sessions said Monday (July 30) the task force is an outgrowth of President Trump’s executive order directing agencies to protect religious liberty, and he said it would help Justice Department employees remember that it is their duty to accommodate people of faith.
“This administration is animated by that same American view that has led us for 242 years — that every American has a right to believe and worship and exercise their faith in the public square,” Sessions said at the summit. The Trump administration spent last week emphasizing religious freedom in a three-day State Department summit.

But Sessions also alluded to the fears of some Americans that the freedom to practice their faith has been under attack. He spoke of nuns “ordered to buy contraceptives,” a reference to an Obama-era contraception mandate. The mandate did not force the nuns to buy contraceptives but to cover the costs of contraceptives in their employees’ health plans.
“Religious Americans are no longer an afterthought,” he said. “We will take potential burdens on one’s conscience into consideration before we issue regulations or policies.”
Speaking at the summit alongside Sessions were a host of religious leaders, including Roman Catholic Archbishop Joseph Kurtz, who chairs the Committee for Religious Liberty at the U.S. Conference of Catholic Bishops, as well as Jack Phillips, the Colorado baker who won a Supreme Court case after refusing to bake a cake for a gay couple’s wedding.

During a panel discussion, a host of religious leaders described their personal religious liberty battles. They included a Chabad rabbi who fought opposition to his building a synagogue in Boca Raton, Fla., a Sikh lawyer who refused to shave his beard and take off his turban to accept a job and Phillips, the evangelical Christian who wouldn’t bake the cake.
The summit examined the controversial issue of religion-based service refusals to LGBTQ Americans head on. 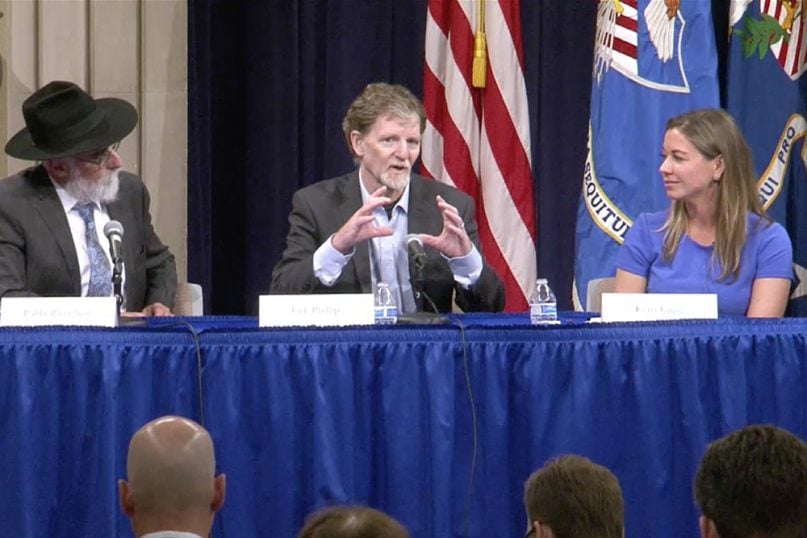 Jack Phillips, center, the Colorado baker who won a Supreme Court case after refusing to bake a cake for a gay couple’s wedding, speaks during a panel that included stories of personal religious liberty battles at the Department of Justice on July 30, 2018. Screenshot via DOJ livestream

Sessions praised Phillips for his “bravery” in his Masterpiece Cakeshop legal challenge. Others, including Kurtz and Heritage Foundation executive Emilie Kao, said the country ought to defend the rights of faith-based adoption agencies to refuse to allow same-sex couples to adopt children.

Without ever referring to LGBTQ people explicitly, Kurtz alluded to the need to protect faith-based adoption agencies’ desires to deny service to gay or lesbian couples because of the Catholic faith’s opposition to same-sex relationships.
“When activists try to force Christian ministries into violating their consciences, they force Christians into a bind,” Kurtz said. “We cannot reject our commitments to service, nor can we turn away from our commitment to the truth about the human person.”
The Human Rights Campaign, a gay rights advocacy and political lobbying group, responded quickly, as did Americans United for Separation of Church and State.
“This taxpayer funded task force is yet another example of the Trump-Pence White House and Jeff Sessions sanctioning discrimination against LGBTQ people,” said HRC Legal Director Sarah Warbelow in a statement.
The Alliance for Defending Freedom, a conservative legal firm that defended Phillips, immediately issued its own release congratulating Sessions and his religious liberty initiative.
“Too many of the clients ADF represents are risking their businesses, their life savings and their safety to follow their conscience,” the statement said. “All Americans should be free to peacefully live and act consistent with their convictions and faith without threat of government punishment.”