Spread the love
Dr. Punyani,
Thanks for the superbly written piece, Nusrat Jahan’s response fits right in with the views of a majority of Muslims.  Here is my rebuttal to the Maulana of Deoband. He needs to catch up with the spirit of the Quran and Islam. Not sure if seminaries go thru the exercise of questioning what was dished out to them for centuries or question and see if it meets the spirit of Islam, which is to foster cohesive societies to bring about peace on earth.
By the way, this attitude is not exclusive to any group – Hindus, Jews, Christians, Muslims and even Bahai’s have a problem with how one practices his or her faith. Everyone wants to lay down strong rules as if their religion is a private club and the membership is if they follow the club rules. (More about Public and Private Islam in the book American Muslim Agenda).
The author has written well about the composite culture of India – Hindus, Muslims, Sikhs, Christians, Parsees, Jews, Buddhists, and other others have taken the best from each other’s traditions. By the way, the Mangal Sutra is common among Muslims, at least among the South Indian Muslims, I placed the Mangal Sutra on my late wife Najma’s neck as a part of the marriage ceremony.  Bindi is common as well, in fact, Bengali women wear them all the times.
God puts love between two souls, it is like the GPS, people find something in the other to be attracted towards each other. Religions don’t marry religions, as they are intangible. Individuals marry Individuals,
I have written 6000 words well-researched article, can a Muslim Woman marry a non-Muslim? Please take a look. https://centerforpluralism.com/can-a-muslim-woman-marry-a-non-muslim-man/
Mike Ghouse
Interfaith Wedding Officiant
# # #

The Interfaith Marriage of Nusrat Jahan, and Deoband’s Fatwa 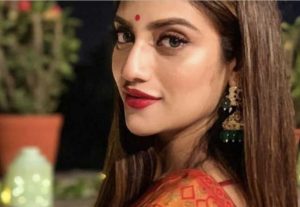 For centuries, people of different communities have not only lived together in India but also adopted each other’s practices.
By Dr. Ram Punyani
Courtesy: https://www.newsclick.in/Interfaith-Marriage-Nusrat-Jahan-Deoband-Fatwa

Nusrat Jahan is a newly elected Member of Parliament. She recently got married to Nikhil Jain. Her marriage and her wearing sindoor, chuda and mangalsutra — all markers of Hindu married women — drew the attention of many.

A Muslim wearing all these took many by surprise, not knowing that India is a cauldron where different cultures interact and influence each other. Annoyed by her marriage to Nikhil Jain, a Maulana of Deoband seminary issued a fatwa on the ground that for a Muslim woman, marrying outside of Islam is prohibited in Koran. In response, Sadhvi Prachi from the Hindutva stable hit back defending Jahan, saying if the Hindu girl get married to a Muslim then she has to wear burqa, etc.

In the face of this criticism, Jahan tweeted in a dignified manner: “I represent an inclusive India which is beyond the barriers of caste, creed and religion.” She added, “I still remain a Muslim and none should comment on what I choose to wear. Faith is beyond attire and is more about believing and practicing the invaluable doctrines of all religions.”

Marriage is a matter of personal choice and what you wear is again a personal choice. As far as the wearing of mangalsutra, bindi, saree, etc. are concerned, these are symbols which have happily become part of the Indian culture. When people adopt it, they are welcome but imposing them does create reaction and opposition. For centuries, Hindus and Muslims have been living together and adopting each other’s practices.

Mutual respect has been the very life thread of Indian social life. While sectarian streams have presented a rigid attitude towards the use of symbols of other religions, the average people have gone on adopting things from the prevalent religions. The orthodox among us have made a hue and cry about these trends, while the open-minded people have adopted and welcomed these while celebrating the diversity. This intermixing has manifested in our literature, art, architecture and social practices of religions. People have also indulged in joint celebration of religious festivals. The glimpses of these are scattered all around, articulated well in parts of Jawaharlal Nehru’s ‘Discovery of India’. Currently, a less-noticed series by author Sohail Hashmi (Hindostan ki Kahani) captures this very essence: the integrative nature of Indian culture.

The reactions to Jahan’s natural choices are disturbing. We need to learn to accept the diversity of the country and syncretism as the very soul of India. The Deoband Maulana’s fatwa needs to be taken with more than a pinch of salt. As such, a fatwa is also an opinion of a particular person; it is not endowed with divine authority. What should guide our life is the Indian ethos and values of the Indian Constitution. Contrary to the opinion of this cleric from Deoband, there are other Islamic scholars who approve of Muslim women’s marrying out of Islam. There are Islamic scholars today who will uphold interfaith marriages and same sex liaisons as well. The core point is social practices evolve over time and are a very precious asset of society.

One does know that some fatwas have played havoc, like the one issued by Ayatollah Khomeini against author Salman Rushdie over his book, ‘The Satanic Verses’. It was a political game. Contrary to that, however, there are a number of fatwas issued by maulanas, which pass off quietly, as a fatwa by its very nature is not binding.

What Sadhvi Prachi is saying is mere rhetoric, to criticize the interfaith marriage in cases where the girl is Hindu and the boy is from another religion. The phrase ‘Love Jihad’ has been coined and promoted in society. Here the main theory is that Muslim boys are luring Hindu girls and converting them to Islam. A lot has happened on this issue; we witnessed the case of Hadiya, where a Hindu girl took to Islam, married a Muslim boy. After a long battle, she did succeed in winning her freedom of choice. On the other hand, the case of Priyanaka Todi and Rizwan ended in the death of Rizwan. The counter to this also exists, where the family of a Muslim girl killed Ankit Saxena, whom she intended to marry. Film Turup dealing with this theme is more than worth a watch.

With the rise of sectarianism, the orthodoxy and the divisiveness has gone up. The Maulana of Deoband is not being taken seriously by Jahan, and rightly so. She has her full freedom to interpret her religion. Her tweet sums up the core civilizational values that have evolved here. It is tragic that the past few decades have undermined these values and there are attempts to present selected Hindu practices as the practices. Intercaste and interfaith marriages are welcome cementing factors in the integration of the nation. One recalls here that Babasaheb Ambedkar wanted to promote intercaste marriages towards the goal of the annihilation of caste. On similar lines, Mahatma Gandhi used to attend only intercaste marriages. In current times, while the Khap Panchayats are standing to oppose same Gotra marriages while the communal forces are opposed to interfaith marriages.

On yet another plane, Zaira Wasim, who came into the limelight with her performance in Dangal, has decided to quit her film career citing it as a hindrance to her religion! Personal choice is OK, but one knows that we have great Muslim actresses in Bollywood and other regional films.

The spread of divisive ideology is, on the one hand, opposing the likes of Jahan — who declares her Indianness as being above everything else — and on the other, influencing the likes of Wasim, who are being taken in by those issuing fatwas from Deoband et al and leaving the professions of their choice.

The need is for a debate about the primacy of moral values of religions and adapting our norms and practices according to changing times. There is a need to promote the synthetic, inclusive trends of Indian culture and creating an atmosphere where the security of minorities prevails, where we are free to love whoever we like and do not feel intimidated in choosing the profession we like.

Ram Puniyani is an author and social worker. The views are personal.