Why do two people fall in love?
Why do you click with some and not with others? What brings two people together? I think love is a product of nature’s GPS.

The Bhagavad Gita, the Bible, the Quran, and all other holy books project the idea that nothing happens without God’s will. All of them say even the blade of grass won’t move without God’s will. What they mean is whatever that God (thing) has created, and planned things to happen, will happen accordingly.  The process is the same from conception to a full-blown adult. A part of what you would look like was programmed in the sperm and the egg, Of course, your behavior is completely under your free will.
Please note that God does not say he puts love between two Christians, Muslims, Hindus, Jews or others, God says he puts love between two souls – that is our GPS that finds each other.
Parveen, a friend sent me an unusual clipping from Prophet’s Muhammad sayings, it gives a hint why two people come together. Hazrat Aisha narrated that the Prophet (PBUH) explained thus, “Souls are troops collected together, and those who got along with one another in the realm of where souls existed before entering physical bodies in this world will continue to have an affinity with one another (Bukhari 3158).” It has a much deeper meaning – in essence we were all one energy at one time.
My understanding of what the Prophet said was a narrative to explain the inexplicable attraction between two people.  All human life has come out of a single couple and has multiplied into different nations and tribes (Quran 49:13). One Original DNA has formed, reformed and continue to split and reformat with much of the same elements except a few new combinations and one of these elements may be the love gene. Each gene is made up of a positive and negative charge, and when two similar genes interact, they get activated and hence the instant like for the other. Hinduism explains that you were connected in the previous birth and the previous form of life or soul and that’s what brings you back together.  Indeed, you will find similar answers in all the beautiful religions. If you turn on the location on your Facebook no matter where you go, it recognizes your friend who is in the same mall or in the same restaurant.
Quran powers that statement in verse 30:21 (Asad), “And among His wonders is this: He creates for you mates out of your kind. So that you might incline towards them, and He engenders love and tenderness between you: in this, behold, there are messages indeed for people who think! “
Quran 30:21(Yusuf Ali), “And among His signs is this, that He created for you mates from among yourselves, that you may dwell in tranquility with them, and He has put love and mercy between your hearts. Verily in that are signs for those who reflect.”
Joel Osteen, “When God puts love and compassion in your heart toward someone, He’s offering you an opportunity to make a difference in that person’s life. You must learn to follow that love. Please don’t ignore it. Act on it. Somebody needs what you have.”
Song of Solomon 3:4 – “I have found the one whom my soul loves.”
Please note that God does not say he puts love between two Christians, Muslims, Hindus, Jews or others, God says he puts love between two souls – that is our GPS that finds each other.
Those who want to understand a Muslim woman wanting to marry a non-Muslim man, and it applies to all others who have similar restrictions,  I would urge you to read the chapter “Can a Muslim Woman marry a non-Muslim” in the book American Muslim Agenda available at Amazon, Google, Barnes and Nobles, and several bookstores. Men in all societies from Bahai and Zoroastrians and everyone in between have traditionally shunned their women marrying outside their faith, it is not their religion, it is their sense of holding the flock together.
Qur’an states, “Husband and wife are each other’s garment,” They are indeed each other’s protectors, defenders, listeners, respect, dignity, and friend. 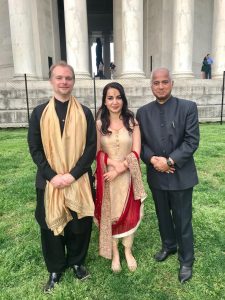 It means that husbands and wives need mutual support, mutual comfort, and joint protection. It is also a reference to the fact that spouses are each other’s sanctuary insofar as each covers the others’ shortcomings and preserves his or her privacy; hence the tranquility and harmony.
Mike Ghouse – Interfaith wedding officiant and a public speaker  – more about interfaith marriages at .www.Interfaithmarriages.org
Author – American Muslim Agenda
President, Center for Pluralism in Washington, DC