Two decades ago, the word Pluralism was resented by the conservatives and right-leaning men (mostly) representing different faiths.  I was consistently attacked for propagating what pluralism is – it is simply an attitude of respecting the otherness of others and never giving up one’s culture, religion or politics, instead, we remain who we are but work together acknowledging our uniquenesses.
I am pleased to report that after two decades pluralism is being accepted. For a long time, Harvard University, Aga Khan and your friend have produced a lot of literature on pluralism. At the Center for pluralism, we have expanded the meaning of Pluralism in Religion to politics, society, culture, and cuisine.
And today, I am so happy to read the following article by Faryal Baloch on pluralism. Well written piece.  Pluralism is the panacea to the world problems.
She writes, “Pluralism in societies or one may say a religious society doesn’t mean to eradicate the differences or smooth things up under one canopy. Pluralism specifically means to reinvent the ways of living, arguing, connecting and disagreeing in a society of differences and inequality. It’s always dangerous to keep discussing and complicating the “religious identities “and “religious violence” which often derail our understandings about the concept of pluralistic societies. Religion is everywhere. The much-needed pluralism is necessary to bridge the gaps between different cultures and religious worlds.
Mike Ghouse
Courtesy of Dunya News, Multan

Embracing Pluralism Is Necessary For The World’s Collective Survival 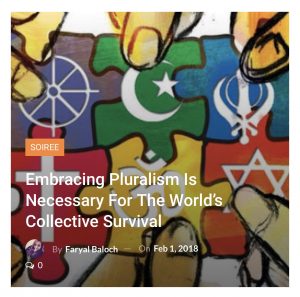 Faryal Baloch is an MPhil student of Mass Communication at Bahauddin Zakaria University, Multan. She is from Dera Ghazi Khan and is interested in pop culture and cinema.