Is racism at the heart of separating children from the parents?  Trump doesn’t care about anyone except himself. After all, these immigrants are less human than him, and he is adept in gathering support from those who are quick to dehumanize others.  Is this the stinky disguised racism? Are we are more privileged than others? 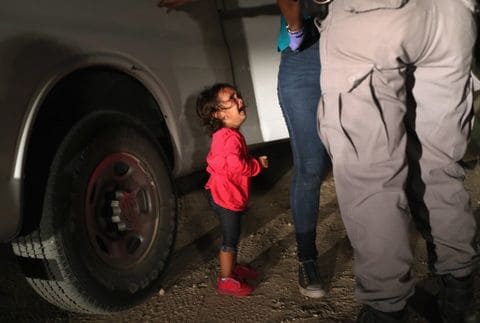 The only right thing Trump has done in the last few years is to extend his ‘fake’ sympathy towards the frustrations of disenchanted Americans and earning their loyalty. They will die for him even if they don’t benefit from it. Such is the power of inclusion which Hillary ignored and I had advised her in my article at Huffington post two days before the election. https://www.huffingtonpost.com/entry/hillarys-last-ditch-effort-the-final-speech_us_581f90f8e4b0102262411963
Now Trump has done to our Allies, what Hillary did to fellow white Americans; ignoring their plight.  He cannot be duping people again and again. It will have its effect sooner than later. Our president needs to stand with all Americans in actions, and not bullshit words.
We need to remember this, Trumps will come and go, but all of us have to live with each other and we must come together for common good and restore America to its glory days, where everyone lived in peace with others.
President Trump is running like a wounded animal, trying to save his tail from the imminent charges of collusion.  He is attacking anything thing, and clearly trying to save and strengthening his base by feeding them the bullshit that Democrats are responsible for the immigration crisis.
The Democrats, on the other hand, are disgusting, allowing Trump to blame them and get away with it. This will come to haunt them in 2018, as more and more people start believing that Democrats are the problems.
Morning Joe on 6/19, and Lawrence O’Donnell on 6/18/18, both MSNBC shows clearly established that is it is not the law, but policies of Trump that has created this mess.  Even the first lady Melania and the former first ladies have spoken out against it from Michelle Obama to Laura Bush to Rosalyn Carter. Don’t we have Democrats with balls to speak out strongly against these falsities? Stephanie Rule of MSNBC played a clip of Trump at 11:55 PM EST – he says, “I alone can fix it” from a campaign rally.
Right now, the biggest issue facing our nation is a separation of family members, particularly babies from mothers. Both the supporters and opposers quote Bible to justify their stand. Have we misunderstood God, or choosing to believe what suits us –are we more privileged than others. Who is wrong, God or us?
Democrats need to speak out loudly and boldly before Trump’s lies become the truth.  King Trump has frightened the crap out of Republicans, they have no balls to stand up to the biggest bully of America.
Mike Ghouse is committed to building a cohesive America based on truth and respect for fellow Americans.