By Mufti Fazal Hamdard The phrase ‘Vasudhaiva Kutumbukum’ is a part of the ancient Hindu texts called Upanishads. It means the World is one family. Hindus often cite this phrase… Read more »

Today is Buddha’s birth celebrations. He was a great psychologist and precisely knew the formula for happiness. Some Buddhists look up-to him as God, whereas I see him as an… Read more » 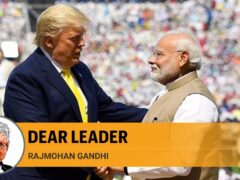