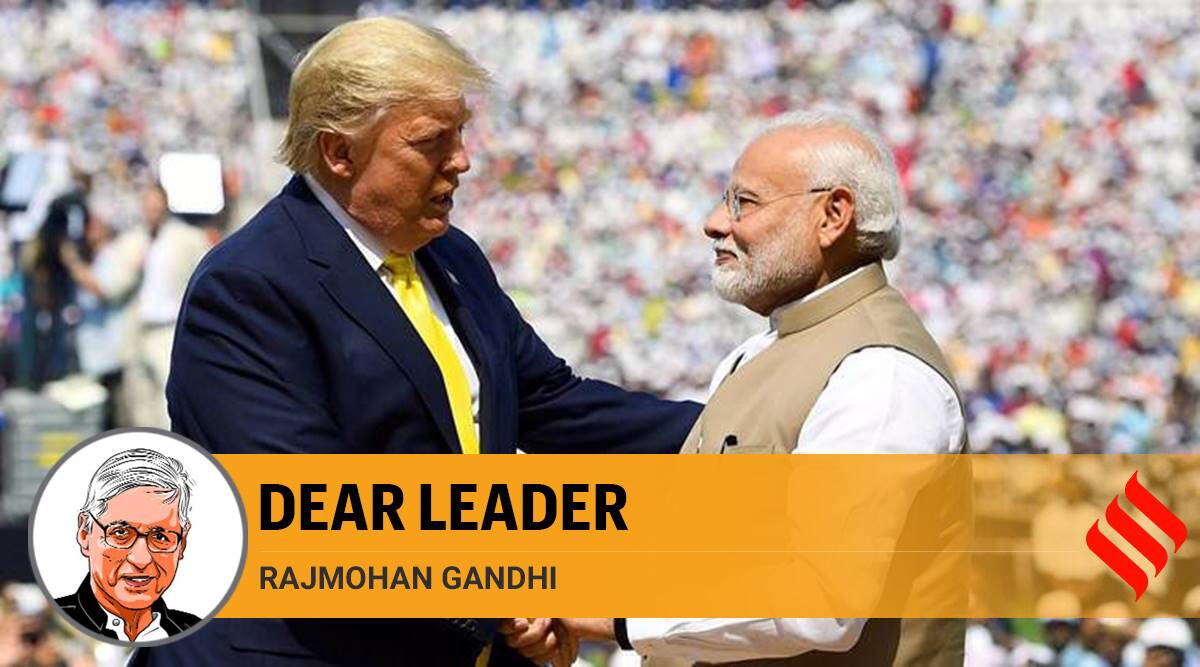 Rajmohan Gandhi writes: PM Modi has a lot in common with the former US president and the Republican Party’s submission to Trump is bound to invite questions about the BJP.

The US’s annual Conservative Political Action Conference, better known as C-PAC, used to be an occasion where ambitious Republicans showed off their skills and staked leadership claims. However, this year’s C-PAC, held in a luxury hotel near Disney World in Orlando, emerged as a platform for competition in Trump worship.

Party leaders displayed Trump pins and wore Trump’s MAGA (“Make America Great Again”) hats as they posed for pictures next to a “golden” Trump replica installed in the hotel. In this figure, the ex-president’s head (including face and hair) was painted in shining gold, and the US flag was mixed into his clothing. From the dais, a beaming Donald Trump Junior, a possible candidate himself for the 2024 Republican nomination, declared that this was a T-PAC rally, not a C-PAC one.

For an onlooker from India, it is not easy to separate this Trump worship from the almost simultaneous renaming of the world’s largest cricket arena, the Sardar Patel Stadium, located near Ahmedabad, as the Narendra Modi Stadium. Not when Trump and Modi are so similar in the three-in-one blend they offer of majoritarian nationalism (“White” in one case, “Hindu” in the other), populism, and “strong leadership”. Not when you also know that exactly a year ago, in February 2020, Trump and Modi were present together, along with Melania Trump, in the very same stadium, before a crowd of 125,000.

Reporting for The Guardian, Hannah Ellis-Petersen wrote at the time: “The effusive bond between the two leaders was on full display, and Trump delivered a gushing speech paying tribute to an ‘exceptional leader… and a man I am proud to call my true friend’, while Modi sat behind him looking pleased.”

“Everybody loves [Modi],” said Trump on that day, “but I will tell you this, he is very tough.”

Only those really close to a person can know how internally tough he or she is. Yet some things stand out. One is that Prime Minister Modi has thick skin. He can build the world’s tallest statue for Sardar Patel one day and later calmly agree that his own name should replace that of Patel for the prestigious stadium.

Modi can go down on his knees at the Parliament House steps — and treat Parliament with casualness when it comes to critical decisions about the currency, or farmers, or citizenship, or Kashmir. He can write in the New York Times, “The world bows to you, Bapu,” and permit the humiliation of India’s minorities for whose protection Gandhi gave his life.

In some situations, unconcern with what people might say or think can be a helpful quality in a leader. Such indifference or acquiescence is less impressive, however, when it meets cruelty in the countryside. Or injustice, suffering or a constitutional violation. Or when simple propriety is involved.

“No, the Sardar Patel Stadium should not be turned into the Narendra Modi Stadium. Take back the ridiculous suggestion.” Why were such sentences so hard for Mr Modi to utter?

We should not be surprised. For years, our Prime Minister has been here, there, and everywhere. He smiles down at us from huge hoardings. Almost daily our phones and computers receive his messages. Month after month, the radio brings matters on his mind to us. On the TV screen, he speaks daily in our homes, whether from a sacred cave, or the Red Fort, or a temple’s foundational floor, or an election rally, or wherever.

Although he seems to talk to us all day and every day, we cannot speak to him, unless we belong to a privileged circle. And we certainly cannot ask him questions. During his seven years so far as Prime Minister, he has not held a single press conference. Not for Narendra Modi the normal give-and-take where a democracy’s leader is pressed for answers.

Trump probably envies Modi for all this, though it is not clear that he often thinks of Modi. Even when he was president, Trump rarely spoke of Modi or of India. In fact, the world as a whole seemed to hold little interest for Trump, unless he saw likely real-estate or tall-tower deals.

During his presidency, Trump held countless press conferences and faced tough questions. He seemed confident about his ability to dismiss every uncomfortable question as hostile, and every fact as a hoax. He was equally confident about the unquestioning loyalty and astonishing credulity of his followers who were, and are, ready to believe whatever Trump says. Including the lies that he won the election of last November, and that the violent bands who invaded the Capitol on January 6, wearing MAGA hats, carrying Trump banners and shouting Trump slogans, were actually foes pretending to be Trumpists.

The Republican Party becoming the Trump cult is bound to invite questions about the BJP and the personality of Narendra Modi.