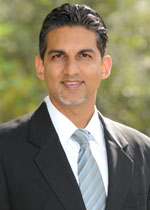 As an American Muslim, I am proud of this appointment, and indeed, this was the dream of our founding fathers; a perfect union where every American has a right to serve the nation in any capacity he or she chooses. Inclusion encourages one to stake his or her claim in the nation-building and ensures security and prosperity of our country.  It is a patriotic thing to serve as a Judge.  We are proud of you Judge Dhanidina!
Here is the information, “Justice Halim Dhanidina was recently elevated to California’s Courts of Appeal, making him the state’s most senior judge of the Muslim faith. “Halim Dhanidina is a justice of the California Court of Appeal for the Second District. Appointed to the Los Angeles Superior Court bench by Governor Jerry Brown in 2012, he is the first Muslim ever to be appointed judge in California. He is an Ismaili Shiite of Gujarati Indian heritage.” Wiki.
News Hour Weekend Special Correspondent David Tereshchuk talks with Dhanidina about engaging with supporters and critics alike, and setting an example for what it looks like to be a “Muslim judge” in the United States.” Here is the info about Judge Dhanidina – https://www.youtube.com/watch?v=27m2iEdfYv0&feature=youtu.be
Over a decade ago, when Hon. Sada Cumber, a Shia Imami Ismaili Muslim was appointed as an Ambassador to the OIC, it was a joy for me.  Ambassador Cumber had told me that I was one of the few Muslims who had congratulated him, and he appreciated for publishing the note in the Austin Statesman (Newspaper).
Here is a quote from the upcoming book, “They refused to share their teaching material because they thought I was an Ismaili Muslim; how ridiculous can one get and I am glad they did that, we have produced great teaching material on Islamic values, and it has never been done before in this format.” So what if I were an Ismaili Muslim? Indeed, our work will become a reference material to teachers of Islam, interfaith leaders, politicians and clergy of all faiths, it shows verses from Quran how they contribute towards creating peaceful orderly societies for the common good of humanity.   We have a choice to condemn bigotry or say nothing, and if we say nothing, we become an accessory to perpetuating wrongdoing.  We still have to deal with prejudice from within.
It is a shame that the immigrant Muslims not only carry the ill-will towards each other’s denominations, but they also poison their children with their biases. I am so glad that the kids born in America reject their parent’s bigotry, and embrace the Quranic value of respecting the otherness of the other. There are two significant chapters on Islamic values and Pluralism in the upcoming book, American Muslim Agenda, and the information is at www.AmericanMuslimAgenda.com
Muslims lag in understanding Pluralism, a Quranic value.  Currently, Aga Khans’ Pluralism Center and Diane Eck’s pluralism project have produced an inordinate amount of literature on Religious pluralism.  The Center for Pluralism has produced a tremendous amount of material on Pluralism in religion, politics, culture, and workplace. CFP’s work is listed at https://centerforpluralism.com/mission-accomplished-at-the-center-for-pluralism/
Thank God for the encouragement of several Muslim leaders, of particular mention are Dr. Basheer Ahmed, Dr. Nauman Anwar, and Dr. Frank Islam from the Sunni Muslim community.  Mr. Farooq Wazir Ali from the Shia Imami Ismaili Muslim Community, and Dr. Zia H. Shah from the Ahmadiyya Muslim community to name a few. More and more Muslims have started seeing the roots of Pluralism in Islam. With the release of the upcoming book, I hope to speak about Pluralism at different public gatherings around the country.
I hope my fellow Muslims of all denominations congratulate Judge Halim Dhanidina.  As Muslims, we have to take pride in our collective contributions to America and the world. We are all Muslims whether we are Ahmadiyya, Alawite, Bohra, Ismaili, Sunni, Shia or any of the many sub-denominations.
Dr. Mike Ghouse is a public speaker, author, pluralist, a Muslim and the executive director of the Center for Pluralism in Washington, DC. He is committed to building cohesive societies and offers pluralistic solutions on issues of the day.  More at https://www.linkedin.com/in/mikeghouse/