Ilhan Omar on Free speech.
Thanks to Walter Ruby, I have removed the word Hero from the article.

BEFORE YOU READ THE ARTICLE, PLEASE READ THE FOLLOWING NOTE:

Before you judge, I request you to read the whole thing and the links therein, that is if you want to share your opinion. If you don’t care, you don’t have to read. I am committed to building cohesive societies where no humans have to live in apprehension. It takes a lot of effort to be specific, so does it take to build cohesive communities. We don’t write off the whole person if he or she has cancer, we treat the specifics cells and work on curing them. Years ago, my boss hated Muslims, even though I was not a Muslim at that time, my name was. He taught me the biggest lesson of the life – his hate for Muslims did not prevent him from giving me the highest performance ratings and pay rise in one of the world’s largest engineering firms: Fluor Corporation way back in 1978.
Without any reserve, I condemn Ilhan’s anti-Semitic tropes like the Benjamin’s and other ugly things she has said, but we must appreciate her for seeking to learn about AntiSemitism from her Jewish friends/ colleagues.
I have a stellar record of working for reconciliation and understanding. I firmly believe in free speech; however ugly it may be, it is our value, and we must defend it, I support free speech while condemning through unintentional tropes. We cannot screw up on one of the most enduring values of America; Free speech. We have to deal with Antisemitism through education; if we push and punish people for free speech, anti-Semitism will not disappear, it will brew. I have taken the lead on educating on Holocaust to non-Jews for the last thirteen years and will continue with that education. I have stood up against similar Muslim request to push against Islamophobia, no pushing, no laws, but educating has a better chance of uprooting Antisemitism, and I will do my share of the work. Forcing people makes Antitemism brew and blow up someday like the shooting in the Synagogue recently or defiling the cemeteries two years ago.
Let’s separate free speech from Antisemitism and also define what Antisemitism is, much of the AntiSemitism is resentment towards Likud Governments policies and violations of international consensus. Make no mistake about it, 94% of the nations are resentful against Israel for violating the United Nations resolutions since 1948, it will not go away until Justice is met for the Palestinians, which in turn will result in enduring security for Jews, Judaism, and Israel. Please place your wisdom to work and not the emotion of insecurity, as a Muslim, I align with your sentiment and the feelings of all persecuted minorities.
My mission is to open people’s hearts and minds towards each other. I believe that the ultimate unexpressed purpose of humans is to live freely and be comfortable with one’s culture, race, religion, ethnicity, sexuality, and individuality.
I hope you are ready to read this piece. It is a sensitive issue, so I urge you to ask me questions before you choose to judge me.
Thank you.
Mike
Ilham Omar is standing up for free speech. The hypocrites on both the parties are attacking her instead of praising her for preserving the most cherished American value; Free speech. 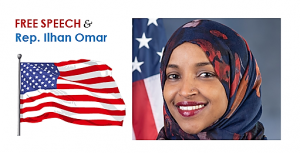 About the book: American Muslim Agenda

The essence of Islam was never explained to Muslims or the non-Muslims before, and the emphasis has always been adherence to rituals. Rituals are a part of Islam or any system, but that is not whole Islam. Islam is not about ruling others, and it is not about imposing oppressive laws or considering others to be second class citizens under their rule. Islam is about free will; in fact, Islam was built on free will. Islam is a religion of universe, a religion of human nature, and it is about living your life in harmony within yourselves (rituals) and with others (essence). It is about living your life and letting others live in dignity and freedom.  If it is not common sense, then it is not Islam. Period!
The book will become a reference manual to teach Islamic values; each chapter is beefed up with verses from the Quran and an occasional Hadith. This book is about Public Islam and the Quran supports it all, for private Islam one may need the support of Hadiths.
The bottom line of Islam’s teachings is to create better citizens (also known as Muslims). This book is about building cohesive societies through 12 Islamic values, never written before in the pages of Islamic history but it was always there. This book highlights the universal principles of Islam that anyone one adopts to build a better world. Being Muslim is not a requirement of Allah, the entire universe is Allah’s creation and the best ones among us are those who care about his creation to include the whole world and 7.5 billion humans and trillions of other life forms. A few talking points at www.AmericanMuslimAgenda.com, You can get the book from Amazon, Kindle, Barnes & Nobles and other book stores if you want an author signed copy PayPal the funds to Mike Ghouse + $4.50 for shipping through ups.
If you are interested in hosting Q&A session, please let me know.
What have we accomplished at the Center for Pluralism?
http://centerforpluralism.com/mission-accomplished-at-the-center-for-pluralism/
Your donation produces bold results.
https://centerforpluralism.com/donate/
# # #
Thank you.
Mike Ghouse
(214) 325-1916
Center for Pluralism, Washington, DC
Pluralism Studies in Religion, Politics, Society, Culture, and business.
email:Mike@CenterforPluralism.com
Website: www.CenterforPluralism.com