Why are Integrated Neighborhoods good for America? I have chosen to live in the predominantly Black community and I am pleased to share my experience.
Over the years, I have lived amongst many people, at least fifty different nationalities.  It was time for me to choose to live amidst the African American Community and I debated about this over a period of one year, and It is a new experience, and I am cherishing it.
I was even elected as a Neighborhood Commissioner by default, as I voted in myself for the vacant seat, but I yielded to another person due to my health at that time.   My zip code is 20032, ward 8 of Washington, DC. 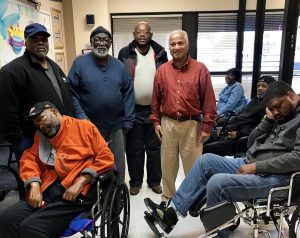 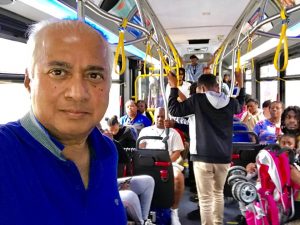 Now, I am enjoying my life with the Black community. There is not a single non-Black person on the busses I have been riding. I walk in into the Senior living centers; again, I am the only one. In the Greenline Metro, all the white folks get off at the Navy Yard, and only me and my black friends are left on the train towards Congress Heights. I shop at Giants,  and I am the only one.  Each one of my neighbors has made me feel one of them, and I feel home with them. Living with almost all communities, I do not feel any difference living here, not a bit. I have taken several pictures in the bus – a black father holding his baby girl close, a black mother telling her son to behave, husband looking surprised when he could not calm his baby, but calmed by the mother in a jiffy.  I see the sameness in the grocery stores. It takes time to know people, and prejudice instilled by parents, friends, clergy, and politicians is the only thing that messes with you. I thank my parents for raising us with a bias towards none.
Take a look at the Jewish, Hindu, Muslim, Christian, white, black and brown and other community’s full-time day schools, what are we doing to our children? How are they going to learn about each other, how comfortable are they with different children? Public Schools offer the necessary interactions with different people. I hope private schools recruit children from different faiths, races, ethnicities, and cultures, so our children would be comfortable when they go to work with them as adults with the least tensions. We have to take the responsiblity to shape America, that we want.
Integrated living produces secure societies, and you don’t have to run from place to place in search of security. Would you raise your children free from prejudices? Your children have at least 70 years to live, why do you want to poison them?  Let them be free from your racial, ethnic, religious, economic and cultural prejudices, let them live without fear.
The Center for Pluralism conducts workshops to turn your employees to give 100% of their heart, mind, and soul not only to the place of work but to their family as well making them productive employees.
Dr. Mike Ghouse is committed to building cohesive societies and offers pluralistic solutions on issues of the day. His new book, the “American Muslim Agenda” is about everything you wanted to know about Muslims. The book is available at Amazon, Barnes and Noble and Kindle. Mike is a public speaker, author, interfaith wedding officiant, a newsmaker and the executive director of the Center for Pluralism in Washington, DC. More about him in three formats at https://www.linkedin.com/in/mikeghouse/